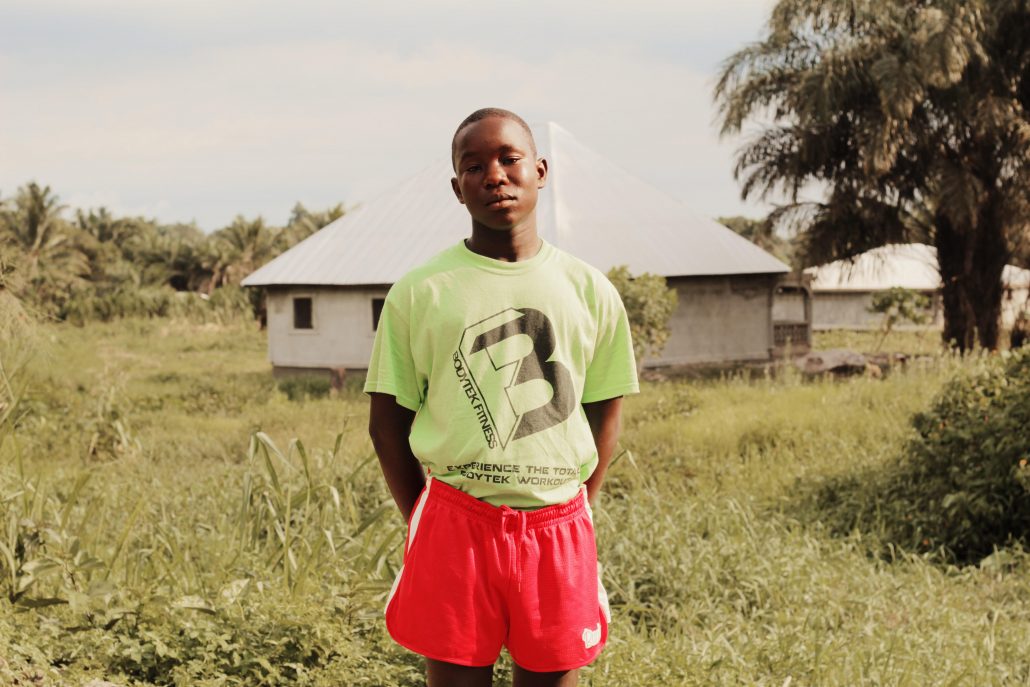 Pictured above, Samuel, a L.A.C.E.S. participant poses for a photo in Kakata, Liberia

Liberia, a country predominantly known around the world by its 15-year-civil war and chaotic Ebola outbreak, stands as one of the poorest and most distressed nations on the planet. For children who call Liberia “Home,” the complex history attached to their citizenship confronts them with obstacles and challenges that often rob them of a healthy childhood. These challenges can include a lack of essential resources like food, clean water, and shelter. However, the country’s current culture of broken families, lack of educational opportunity, and years of cyclical poverty pose just as serious of a hazard for it’s most vulnerable people.

Unfortunately, for many kids in Liberia, their families are often unable to support them both financially and emotionally. This creates an all too common narrative where young boys and girls leave home and attempt to provide for themselves, alone on the streets. The negative social stigmas surrounding these street children reinforces in their minds a lack of self-worth and value. When these ideals are pushed upon them over long periods of time, they grow up to become struggling adults, unable to break free from the current cycles of poverty and hardship they find themselves in.

Samuel, a boy who’s been actively involved within our Liberia program for two years, sat down to speak with a visiting staff member back in May. He was gracious enough to share a bit of his story. When he was first asked questions about himself, Samuel seemed shy and almost embarrassed to make eye contact with the man speaking to him. But after a few jokes, he began laughing along and sharing about his interests and personal experience with the L.A.C.E.S. program.

“So when you’re not at L.A.C.E.S. playing football (soccer), what are some things that you like to do?” our staff member asked. “I like drama.” Samuel shared. He went on to explain that he had once had a small role in a community play called “Don’t Play with the Drunkard” and found it to be one of the most exciting experiences of his life. His contagious joy and warm personality made it very apparent that he could capture an audience’s attention with ease.

As the conversation continued, our staff member began to ask Samuel a bit more about his day-to-day life. “I live on the streets…” Samuel began. “At night I sleep in the garage.” Samuel, like many children who come to the L.A.C.E.S. program, are often forced to seek shelter at night wherever they can find it. For him, a local car garage that becomes vacant in the evening is the safest solution he has to getting a good night’s sleep.

As Samuel continued answering the difficult questions surrounding his circumstances, he appeared to become more and more dejected. His pain was evident and the lack of stability in his life was hard to even comprehend. He went on to share that before he started living on the streets, his father passed away and his mother was unable to provide for him on her own. She made the decision to leave Samuel in the care of his aunt and moved far away. Things then took a turn for the worse when his aunt began neglecting, beating, and abusing Samuel. This time of his life was very difficult for him to talk about. He explained that in order to get away from his abusive aunt, he fled to the streets and has been fending for himself ever since.

When asked how often Samuel is able to eat, he answered with a simple “not every day.” As the conversation progressed, it was obvious that the gentle young man was struggling to talk about these sensitive issues in his life. To ensure that he felt comfortable to continue, the conversation quickly changed its focus to the future.

“So Samuel, what do you want to be when you grow up?” the staff member asked. With a big grin, Samuel quickly responded by saying he wants to become a “big man doctor” so that he can “save people’s lives.” His answer shocked no one as he is known to be the kind of child who regularly serves and helps those around him.

While Samuel’s life has been filled with immense difficulties and hardship, we at L.A.C.E.S. stand to provide for him in ways that he is desperate for. Every time he steps onto the soccer pitch during our programming, Samuel is able to know that he is cared for, wanted, and capable of so much more than he believes! While we ensure he is fed a hot meal every game day, we are also diligent in giving him our time and energy as mentors and teachers of the values he will use for the rest of his life. The work of our organization can’t erase Samuel’s painful past, but it can instill in him the confidence needed to move forward.

You Can Make the Difference!

At L.A.C.E.S., the work we do for vulnerable street children would be impossible without the support and financial giving of our faithful donors. While not everyone can go and physically support our work, online donations empower us to continue hiring local staff members who can. Through generous monthly donations and one time gifts, boys and girls like Samuel are able to receive the structure and care they have been desperately craving. Your donation will go towards providing children with hot meals, a place to come and learn, soccer equipment, and much more. Would you consider joining us in impacting the lives of children like Samuel? We take our mission seriously and would love to have you be a part of it. To donate today, you can click here!