Last year, the Founder and Executive Director Seren Fryatt shared her vision to expand the impact of L.A.C.E.S. to other countries. “We have been looking at several countries where we can start a new chapter for L.A.C.E.S.” Fryatt explained, “We are exploring ways we can reach more children who are at risk.”

The success of L.A.C.E.S. has been well recognized by the international community.  “We have been in Liberia for eleven years,” Seren Fryatt explained from her office in Takoma Park in Maryland.  Fryatt just returned from a trip to Liberia to review the in-country operations. “We have seen extraordinary results through the approach of mentoring children through sports.” Because of the success, L.A.C.E.S. has experienced, there has been a crucial demand to expand our role to other countries.

This week, a small group of L.A.C.E.S.’s staff from Liberia embarked on an exploratory trip to the Northwest neighbouring country of Sierra Leone. The short distance of 361 kilometres (224 miles) from Monrovia in Liberia to Freetown, Sierra Leone could allow the organization to strategically grow organically. 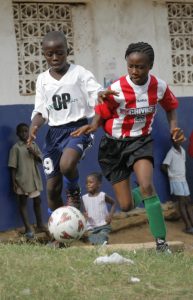 Sierra Leone is often called the “little jewel” in West Africa, because of its natural beauty coupled with mountainous landscapes and rich minerals. Similar to Liberia, the country has had a bloody history of a long eleven-year civil war that began in the year 1991. Over 500,000 people were displaced and over 50,000 were killed, in a country of fewer than 4 million people. As you can imagine, it is the children from this small West African nation that have been witnesses to this turmoil.

With 70% of the population living under the poverty line, children are often the most vulnerable of all.  In addition, there have been many injustices which include female genital mutilation, lack of education, and forced labour, which have all contributed to human rights’ challenges that face children in this country.

“We have a proven model that is very successful,” explained Fryatt, “Now, we want to expand and reach out to more young people through our sports mentoring program.” As L..A.C.E.S. begins to grow its international scope, the goal to bring hope to many children who live on the streets will continue to expand.

Source:  Save the Children Federation

PrevPreviousEvery Day: Make Their Journey Yours
NextGLOBAL HACKATHON – TO FIGHT DISCRIMINATION IN SPORTSNext