Welcome back to my L.A.C.E.S. journey! If you missed my blog introducing myself make sure to go read it here.

There hasn’t been a day without learning something new. The most notable topics I have experienced has been shifting to virtual programming and the ongoing work that constantly pushes L.A.C.E.S. forward. One thing that has stuck with me is when Leah, the Operations Coordinator, stated that to work at L.A.C.E.S. you have to be willing to put on different hats and change them within a moment’s notice. I have been able to see this put into practice everyday since starting with L.A.C.E.S.

The staff’s dedication and passion to the mission and growth of L.A.C.E.S. has really pushed me to evaluate what I want to see within a nonprofit’s leadership team. I know my L.A.C.E.S. journey, especially the interviews with the people of L.A.C.E.S., will continue to give me insight and perspective to my future as well as continue to teach me hard skills that I will be able to apply to future opportunities.

Even though I haven’t been directly involved with the staff in Liberia, I know that they are just as dedicated to the mission and values that I’ve seen at L.A.C.E.S. Seren and Leah noticed how interested I was about learning more about the behind the scenes workings of L.A.C.E.S. so they incorporated this interview series into my internship, which has allowed me to speak with and ask questions to the global staff!

The first person I was able to interview and speak with was James Moore, the Liberia National Program Director. James is a native of Liberia who quickly grasped the L.A.C.E.S. mission and has been a passionate and integral part of the success of our programs.

James has worked with L.A.C.E.S. since its inception. Like many of his fellow countrymen and the youth that L.A.C.E.S. was founded to serve, he had to put his life on hold to survive when a 14 year civil war broke out in Liberia. James has chosen to invest his time in raising up positive role models throughout Liberia and sees his work as an opportunity to raise up strong and moral leaders to help prevent future conflict in Liberia. I was beyond honored to have the opportunity to meet James and to hear about his insight and personal experience with L.A.C.E.S.

“Never Give Up On Your Dreams” 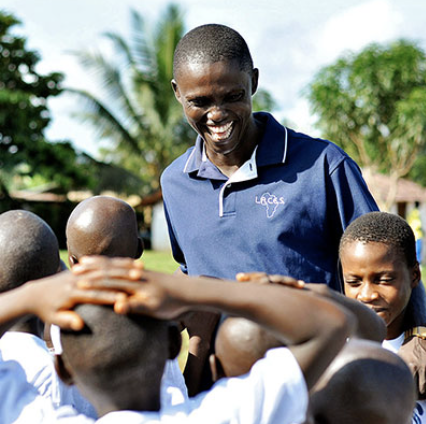 Within seconds of speaking with James Moore I knew L.A.C.E.S. had a special place in his heart, and he feels he has been greatly impacted by this wonderful organization. James’ response when asked, “What is your favorite thing about working with L.A.C.E.S.?” gave me chills. He replied that he loved “the feeling that comes with helping people,” and continued on with the example of seeing a child being fed a meal in a country where many children struggle to make ends meet. This harsh reality made me understand the impact that L.A.C.E.S. has on children across the world and helped me gain hope for the future of children, both in the United States and abroad, as well as in my future work with nonprofits.

I was very curious to see how James compared L.A.C.E.S. to other organizations, and his answer did not disappoint. He believes it’s so obvious it’s “written in the sky,” and that no other organization is as special as L.A.C.E.S. He continued on to explain that everyone and every child in the L.A.C.E.S. program life is transformed, unlike any other organizations. Instead of having people come in, play with the kids, and leave, L.A.C.E.S. makes sure to follow up, check on, and create connections with the youth for multiple years.

“Never give up on your dreams. Never ever. Your dreams are tiring, but they will become reality.”

Hearing this from a prominent person in the Liberia community made me realize that I made the right decision to join the L.A.C.E.S. team and family. If I didn’t know before, I knew now that it was an act of God when I came across L.A.C.E.S. The last thing James left me with was, “Never give up on your dreams. Never ever. Your dreams are tiring, but they will become reality.” These words struck my core. Despite everything, James has never given up on his dreams, and neither will I.