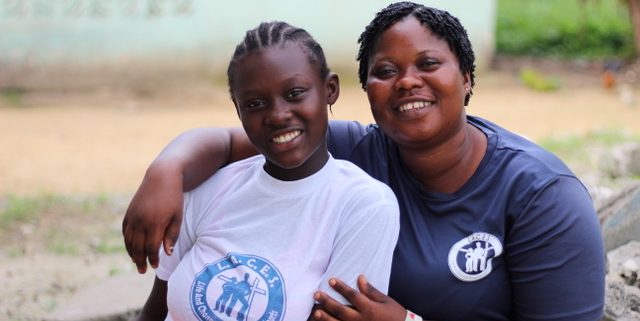 Pictured above, L.A.C.E.S. founder Seren Fryatt poses with a child named Rachel within the L.A.C.E.S. program

It was ‘game day’ for our L.A.C.E.S. children living in Kakata, Liberia and the excitement surrounding the afternoon could be felt throughout all of Margibi County. Local kids swarmed the dusty soccer pitch that sat only a few minutes away from the town’s main road. One by one they began frantically grabbing for jerseys and dividing themselves up into their assigned teams. Meanwhile, adult community members who serve as our coaches worked hard to gain order over the seemingly chaotic moment. This is a weekly occurrence, but by the way the children were behaving, an outsider would have assumed it was nothing short of an important holiday or special occasion. Pictured above, girls in the L.A.C.E.S. program cheer after a game

Every week, we at L.A.C.E.S. facilitate four soccer practices for at-risk boys and girls living within this community in West Africa. More importantly, we incorporate a research-backed, mentorship curriculum that focuses on values like self-esteem and respect. Along with the practices and mentorship components, two days of the week are dedicated to competitive ‘game days’ followed by a hot meal.

The children that take part in the work we are doing are some of the most vulnerable in the entire world. Most of the time, they claim “the streets” as their home within this post-war community. Runaways, Ebola orphans, and former child soldiers are all normal descriptors for the kids within the league. Oftentimes, the children who show up to play have been forced to turn tricks and steal throughout the week leading up to our time together. But when given the opportunity to come to the L.A.C.E.S. program, these same children are able to gain back a crucial part of their childhoods and are seen as valuable and worthy to be there.

A Kickoff to Remember Pictured above, girls in the L.A.C.E.S. program line up and prepare for the first kick of the game

The girl’s game, which happens to be a modified version of kickball, was about to begin and the energy around the moment was electric. The outfielders began yelling back and forth to one another while the team at bat lined up for the first pitch. The hot sun continued to scorch the dirt playing field and added an appropriate intensity to the moment.

The girl chosen to kick off the game, Rachel, stepped up to home plate and got into position. As the anticipation of the moment began to build, one of our local coaches quickly ran onto the field and brought the start of the game to a halt.

Seren Fryatt, L.A.C.E.S. founder and executive director, along with another international staff member were observing the program on this particular day in Liberia. Their goal in being there was to gather content for promotional endeavors. It was Seren who had initially asked the opening kickoff to be postponed upon noticing that Rachel, the eager first kicker, was pregnant.

In Liberia, the negative stigma behind an unplanned pregnancy can greatly affect the mother’s quality of life by damaging her own sense of worth. For 13-year-old Rachel, her young age, impoverished living conditions, and reputation as a street child made her particularly vulnerable. While her circumstances appeared bleak, she had found that her time at L.A.C.E.S. was a refuge away from her troubles. As excited as Rachel was to be the first kicker on ‘game day’, it was apparent to everyone that her pregnancy had progressed too far to allow her to run the bases.

Impactful Beyond What is Seen

“I can run for her!” suggested Seren. “She can still participate and I’ll just run the bases for her.” After some discussion with the coaches and Rachel, it was decided. Rachel was elated to be able to still participate and even kicked a home run with Seren as her new partner.  As Seren slid into home plate, the entire crowd cheered and celebrated. It was momentous and impactful far beyond what could even be seen.

“How did you feel when Seren offered to run for you?” a staff member asked Rachel after the game. She gave off a slight giggle and expressed that it made her very happy. Currently, Rachel has gone back to live with her grandmother in preparation for her child to be born in August.  The baby’s father is not in the picture and Rachel understands that she cannot remain living on the streets once she gives birth. When asked what she was most concerned with in regards to having a child at such a young age, she responded by saying she is “not ready for it.” Unfortunately, her story is far from uncommon within developing communities like Kakata.

While children like Rachel are often made to feel shamed and ostracized by their communities, we at L.A.C.E.S. are committed to welcoming them with open arms. By accepting children into our program with severe and complicated histories, we are able to show them that their value and worth does not lie within their circumstances. Children like Rachel and so many others are able to show up to our games, learn critical life values, reclaim their childhoods and have some of their most pressing needs met. While girls like Rachel in Kakata may struggle through stigma and shaming, they know that at L.A.C.E.S., they are accepted.